Your current browser may be outdated and not fully supported by DinnerTime. Click here to learn about the recent versions of modern browsers. 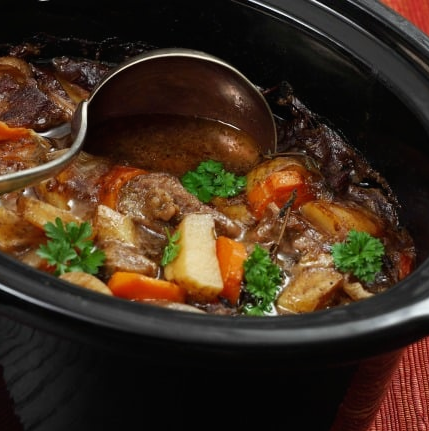 To add more flavor depth, sear meat in a hot pan with a liitle oil for a couple of minutes per side. It will develop a nice dark crust which adds a lot of flavor to the stew. If you'd like, you can flour the meat by rolling the cubes in the flour before you sear it to make a thicker base, rather than adding the flour near the end of cooking.

If you are able to add the vegetables an hour or two before the stew is finished rather than at the beginning, the vegetables will have a bit more substance.

To cook in oven rather than in a slow cooker, cook in a covered oven-safe pot or casserole at 325 °F for 2 hours until tender.